Scorpions exist in Florida and are considered a minor pest. Luckily, we do not have an abundance of them running around, but if you have them in your home, that is a major problem. The number of residents who contact a pest control company for scorpions is not a large amount. However, they do exist, and we should be familiar with what they are and their behaviors in case you may encounter one. 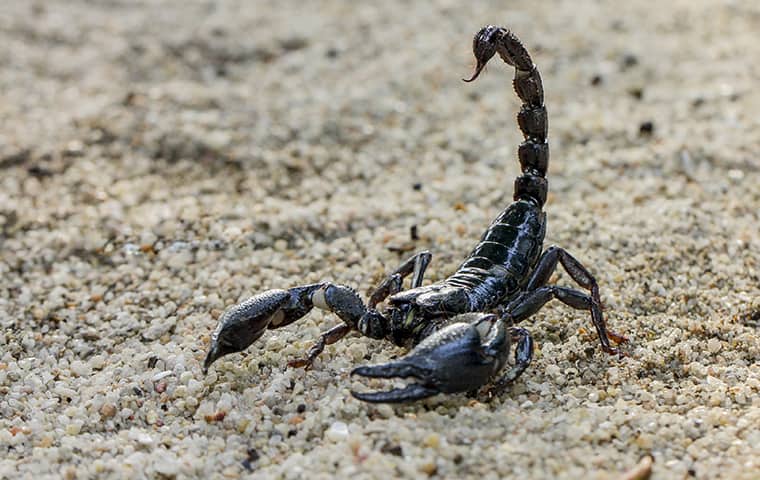 Identifying a scorpion is not a challenging task. They resemble a lobster or crab, according to many residents who have had encounters. Scorpions vary in size - typical scorpions are from 1 to 4 inches long. Most scorpions are dark brown in color and have flattened bodies. They have a total of 10 legs; the front pair of legs has evolved into a pair of claw-like pincers that allow the scorpion to hold its prey in place. Scorpions prefer areas outdoors under nearly any type of object. Newly-built homes experience much nuisance from scorpions - they find homes in the unfinished house including wall voids, construction materials, or loose boards.  Scorpions are known to be active at night, much like roaches, and they glow in the dark naturally. Black lights are great tools to inspect for scorpions!

Many species of scorpions exist in the world that are extremely dangerous and deadly to humans. There are 90 species found in the US, and 1,300 total worldwide. Researchers at the University of Florida claim that the scorpions found throughout Florida are not capable of providing fatal stings - only one of the 90 inhabiting the US is capable of fatal stings (This species is typically found in the southwest). Scorpion venom attacks the nerves. If the scorpion is a non-lethal species, the sting will be somewhat more painful than a wasp sting. The area that has been stung will become swollen and red. It is common for individuals to show signs of an allergic reaction or develop symptoms dangerous to their health. Because of this, it is highly recommended to seek medical attention at any time you have been stung by a scorpion to be sure your body reacts well to the venom. Whether or not scorpions in Florida are capable of producing a fatal sting, they should be avoided and not handled by anyone who is not experienced in handling these pests. If you notice scorpions in your home or yard, contact your local pest control company to carefully remove these creatures from your environment.

University of Florida Entomologist Lyle Buss deals daily with Florida’s scorpions and has much expertise with the pest.  He claims Florida has only three inhabited species of scorpions. The first and largest of these species is the slender brown scorpion (Centruroides gracilis). The Hentz Striped Scorpion (C. hentzi) is the smallest and most common scorpion found in Florida. The third species of scorpion found in Florida is the Guiana Striped scorpion (C. guianensis), which is strictly found in Southern Florida including Monroe, Miami-Dade, and Collier counties.

Reynolds Pest Management, Inc. has over 20 years of expertise in controlling scorpions and can manage your scorpion problem with no hassle! For better peace of mind, Reynolds Pest can evaluate your home to determine if you may be at risk of scorpion infestations. Contact us now for more details regarding this Florida pest.