How many names can one spider have? The huntsman spider is known by several different names around the world. In Florida, we typically call it the crab spider or banana spider due to its extra long legs. Sometimes it is referred to as the wood spider in woody locations around the world. South Africa calls it the rain spider, because they seek shelter before the rains comes, and it is known as the cane spider in Hawaii.

The crab spider is not a true native to Florida, as they were imported to the US from Asia. The oldest discovered fossil of a spider dates back 400 million years ago! Scientists believe that spiders evolved from crab-like chelicerate ancestors. The only states that have reported sighting of the crab spider are Florida, Hawaii, Texas, and California.  However, this does not mean it is impossible for them to live in other areas. The crab spider has managed to travel across the globe by becoming an unwanted passenger on ships. Wherever the ship stops, if the weather is warm enough to allow the spider to stay alive, that is where the spider will get off. 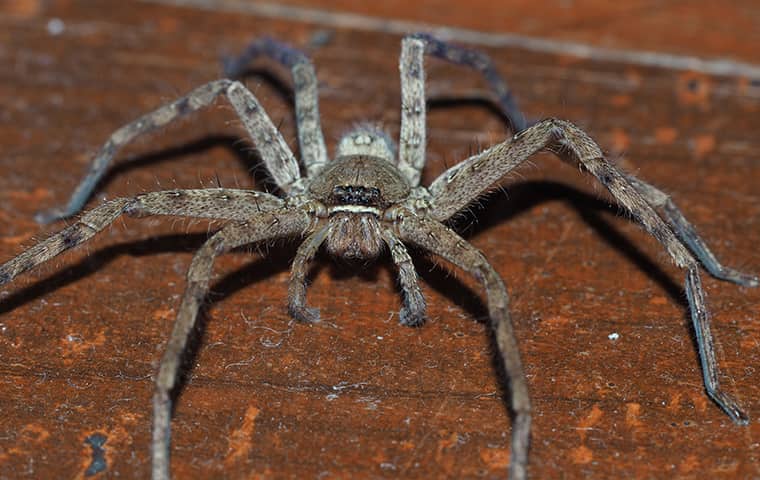 The crab spider (Heteropoda venatoria) is fairly easily identifiable compared to others. They are not a hairy species. Female crab spiders have a tan band on their backs and are significantly larger than males, while males have a darker appearance. The leg span of this spider averages 3-5 inches. Males, however have longer legs, a pale area behind their eyes, and a long dark stripe on the abdomen.

Crab spiders are a species of spider that does not spin a web. Instead, this spider will hunt and scavenge their food. A typical diet consists of insect invertebrates. On occasion, depending on the size of the spider, they will consume geckos or skinks. The crab spider is the most common spider in South Florida. The spider typically lives and hides away in cracks of trees or shrubs; however, they have been reported to enter homes and cars! Crab spiders are known to be extremely fast when traveling around. They will cling to a surface to prevent being picked up or brushed away. This gives the spider a better chance to attack or bite if needed. The crab spider is not venomous. However, the female has been reported to show aggression towards people if she feels her eggs and young are in harm’s way. This spider has bitten people, but without any serious complications or hospitalization. On the contrary, crab spiders are considered to be beneficial. Other pests like roaches are consumed by this species of spider.

A female crab spider is capable of leaving behind a chemical or pheromone, which a male will detect. The male crab spider will make a substrate-borne sound, and then anchors itself down and use his legs to create a vibration. Most of the mating sound comes from within the male abdomen. Females whom are interested in mating will then approach the male.