They both look alike, bite humans, and can be transmitted through clothing or bedding. We’re talking about scabies and bed bugs, two nasty types of critters that many people confuse because of their similarities.Their presence in a home can disrupt one’s general well-being and once you’ve encountered one or both pests, you’ll want to get rid of them as quickly as possible. Read on to learn about the important differences between scabies vs. bed bugs and how you can send them both packing. 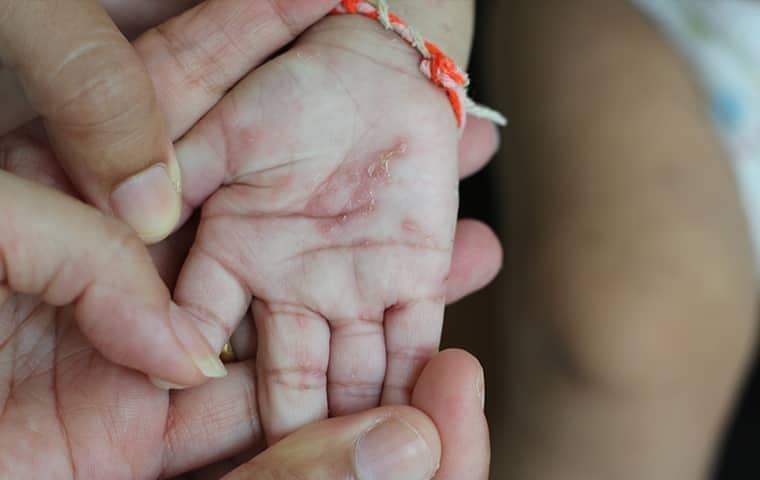 While both pests look similar, only bed bugs are large enough to see with the naked eye. Adult bed bugs are approximately the same size as an apple seed. That’s still tiny, but big enough to spot. Bed bugs go into hiding during the day, venturing out at night to get a blood meal from a human or animal host. Once they’ve had their fill, they’ll scurry off and can go many months without eating, which makes them harder to find and eradicate. They tend to hide in dark areas including under mattresses and bedding, and inside floor and wall cracks.

Scabies, on the other hand, are so tiny they can’t be seen without a microscope. That’s because they are parasitic human itch mites that burrow deep under the skin where they lay their eggs. They live, breed, and die under the skin. Technically, scabies are not considered an insect, but a parasite. A problem with bed bugs is referred to as an infestation while an encounter with scabies is called an outbreak.

A bed bug’s bite usually appears as a raised red welt on the skin and is common on any part of an exposed body. Bed bud victims usually find bites on their face, neck, arms, hands, legs, and shoulders. They can take a few days before becoming itchy and red. The insect injects an anti-coagulant substance into a person’s skin when it takes a blood meal. This prevents blood cells from clotting together, making it easier for the bedbug to consume them. It also causes various reactions from person to person. You may not even feel the bites themselves because the insects release an anesthetic, which is why they can easily feed on someone who is sound asleep. These little insect vampires can also feed on a human or mammal for up to ten minutes at a time. Like mosquitoes, they are attracted to us humans because of the carbon dioxide that we emit.

If a human host is not around, bedbugs may bite cats, dogs, or even birds to get a meal. Once fed, they can go up to 15 months without another meal, which makes it difficult to determine that they are causing a problem. Bed bug bites sometimes appear in lines where many insects fed on a person at once. They sometimes cause a burning sensation as well as itchiness before turning into red bumps. Bed bug bites usually go away on their own, but you can speed up the healing process by resisting the urge to scratch and using a hydrocortisone cream on the affected area. In some cases, you may need to visit a doctor and be prescribed a steroid cream. While self-care can help the bites go away faster, it won’t do anything to remove bed bugs from your home.

Scabies bites are a little tougher to diagnose since they initially look like a rash that could be caused by any number of irritants. They also appear on specific parts of the body, particularly in warm folds of skin, under fingernails and toenails, and in between toes. Small red bumps that are relentlessly itchy usually signify scabies. In some cases, they can blister and crust over. You may also see traces of the parasites’ burrows, which appear as thin threads that are red, grey, or brown lines. While the symptoms of bed bug bites appear after a few days, scabies bites may take up to two months before presenting symptoms. The itching tends to intensify over time and can eventually disrupt sleep.

Unlike bed bug bites, there are no home remedies for scabies. A doctor can determine if you have them and will prescribe a topical cream that usually clears them up in a few days. Bedding, clothing, or furniture can all spread both bedbugs and scabies. They can make their way into bags and be brought into a hotel, public building, or another residence. However, scabies is a little more contagious because they’re also transmitted by skin-to-skin contact.

Getting Rid of Bed Bugs and Scabies

As mentioned, scabies can be wiped out by applying a medicated cream. Bed bugs, on the other hand, must be killed. While there are many DIY tactics to stop the spread of the infestation and kill bed bugs, calling a bed bug exterminator may be your best bet to completely get rid of them. Bed bugs cannot thrive well in either extreme heat or cold conditions. That means you can place items that are small enough in your dryer on a hot setting or in your freezer to help kill them off. Heat treatment is one of the most effective ways exterminators are ridding homes of bedbugs. With heat treatment, an infected room of a home is heated to at least 117 degrees Fahrenheit, a lethal temperature for bed bugs. This ensures all cracks, crevices, and other hiding spaces get hot enough to kill the bugs. Heat treatments are also usually combined with pesticide application to make sure the problem goes away. Bed bugs are good at hiding, so repeat exterminator visits are usually required.

We Can Help With Bed Bugs

While we can’t treat scabies, we can help remove bed bugs from your residence. We’ve been serving Florida residents and helping them live pest-free for over 25 years. If you suspect you have a bed bug infestation, contact us for a visit and estimate. We’ll be happy to make recommendations to solve your bed bug problem.